The Mini-Gastric Bypass (MGB) is a relatively recent development and was first performed by Dr Robert Rutledge in 1997.  Now, more than 20-years and 30,000 procedures later, MGB is rapidly becoming the procedure of choice for many surgeons throughout the world. Patients undergoing MGB lose around ¾ of their excess weight within 2-years and gain substantial health benefits.

How is it done? (see diagram)

Firstly, the stomach is divided in such a way that a small tube is created (rather like a gastric sleeve).  Food continues to pass into this small stomach, but the amount that can be eaten is obviously much reduced.  This is what we call the ‘restrictive’ component of the procedure.

Next, a loop of bowel about 150cm in length is brought up and joined to the lower border of the new, smaller tube of stomach.  The “join” is referred to as an anastamosis.

Food now passes from the small stomach into the small bowel and here it meets the digestive juices which have been produced in the bigger stomach.  In effect, therefore, about 150cms of bowel have been bypassed, which means that calories normally absorbed in this segment of intestine, are no longer absorbed.  As with traditional bypass, there are also changes various gut hormones which also promote weight loss.

So, weight loss in MGB is produced by (1) a smaller stomach and (2) malabsorption of calories across a bypassed segment of small bowel. 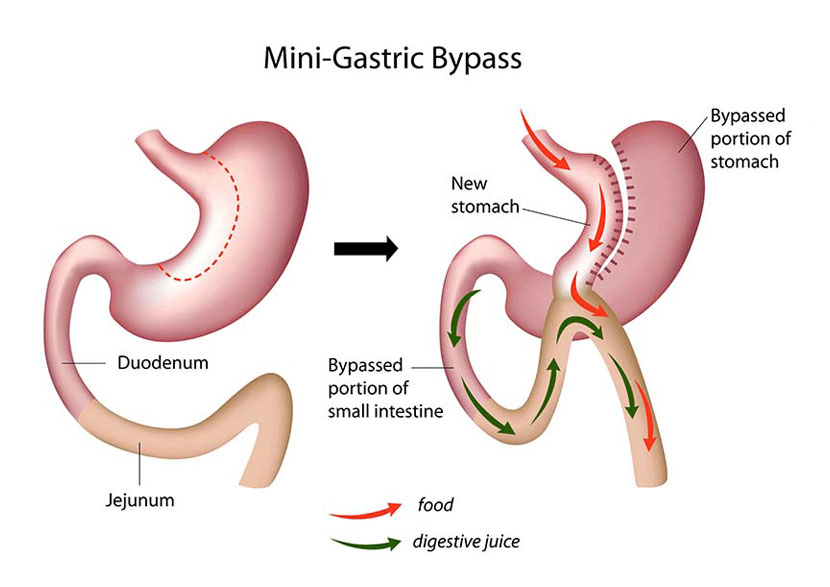 Advantages of MGB versus Roux-en-Y bypass

The main advantages can be seen by comparing the two diagrams:

From start to finish the staff were amazing and so reassuring. Had a gastric band fitted in March 2021 and honestly I’m sorry I didn’t do it years ago. Read More

Sinead
(Results may differ from person to person)

I felt very informed and safe and well looked after. I had a breast augmentation in June 2018 and couldn’t be happier from start to finish. Read More

Amanda O,Loughlin
(Results may differ from person to person)

Couldn’t have dreamed of a better experience! Made me so comfortable and at ease. Couldn’t recommend Auralia enough I have never ever been happier! Read More

Niamh
(Results may differ from person to person)

Sinéad McMullan
(Results may differ from person to person)

Not only life-changing has given me a newfound confidence in myself. I had two surgeries with the clinic. And everything from consultation, pre-op and post-op care was amazing. Read More

MA
(Results may differ from person to person)

Laura Gilheany
(Results may differ from person to person)

Are there any disadvantages?

The two main potential problems with MGB are:

Bile Acid reflux: – because the main body of the stomach is still connected to the intestines, there is a theoretical risk that digestive juices can reflux up into the small stomach remnant, causing ulceration, inflammation and heartburn.  However, recent studies suggest that this is not a major problem in practice and there are technical approaches to the surgery that can reduce the risk of this complication to a minimum.

What about the health benefits?

Studies suggest that weight loss (around 75% of excess weight) achieved with MGB is similar to traditional bypass and sometimes greater.

In addition, the health benefits achieved by the MGB are similar to those observed after Roux-en-Y bypass.  This is especially true of Type 2 diabetes, where some studies show complete resolution of diabetes in >90% or patients undergoing MGB.

For all these reasons, MGB is likely to become even more popular.

Is MGB preferable to Roux-en-Y bypass?

For some patients it may well be.  MGB is certainly quicker, the operative risks appear to be the same and it is a reversible procedure.  Moreover, the weight-loss outcomes and health benefits are similar when compared with traditional Roux-en-Y bypass.

Need to finance your treatment?

For details on finance contact the clinic or your Patient Coordinator.
Find out more
Book Your Free Consultation