How does the gastric band work? 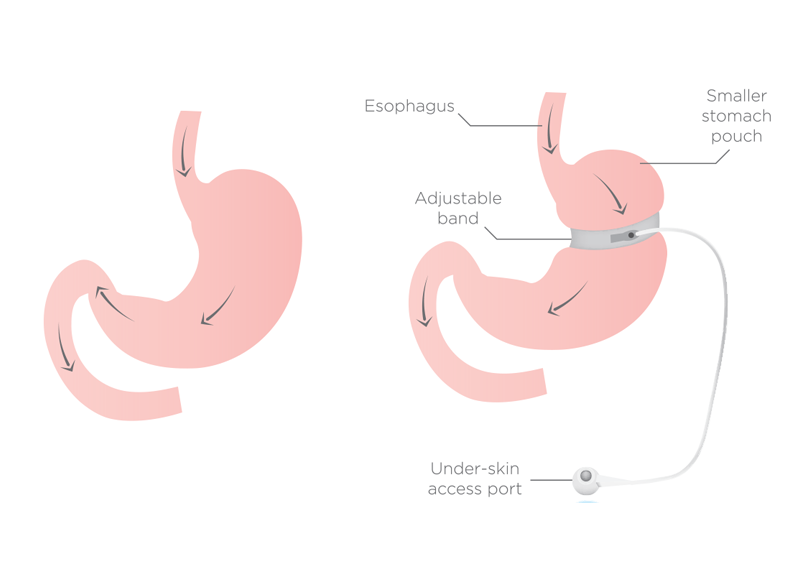 It is widely believed that the gastric band works by creating a feeling of fullness (satiety) in the recipient. This feeling is believed to be due to stimulation of the vagus nerve which carries information from the body’s organs – including the stomach, pancreas and liver – to the brain.

In the gastric band patient, food ingested into the stomach above the band (pouch) results in stimulation of special branches of the vagus nerve (vagal afferents) which then transmit a satiety response to the appetite centre in the brain. This results in reduced food intake and weight loss.

However, until fairly recently, the scientific evidence supporting this theory was rather sparse. But a few years ago, an elegant piece of research from Australia suggests that it is broadly correct.

Researchers used obese rats and applied a miniaturized gastric-band to the stomach. In one group of rats the special afferent vagal fibres connecting the stomach to the brain were destroyed using a substance called capsaicin, whilst in the other group the nerve fibres were left intact.

In obese rats with intact vagal fibres, adjustment (tightening) of the band caused a significant reduction in food intake, weight and fat mass. However, in those rats in which the vagal fibres had been destroyed, no such changes were seen. It was also noted that activity in the parts of the brain associated with appetite regulation, was blocked in the capsaicin-treated rats. This study provides strong scientific evidence that specialised vagal fibres play a key role in the mechanisms resulting in substantial and durable weight loss after gastric banding.

The key point to remember is that the gastric band is not an obstructive device; it is not meant to stop you eating! Instead, by listening to the “fullness” (satiety) signal from the band, you will feel satisfied with small amounts of food, eat fewer calories and – hence – lose weight.